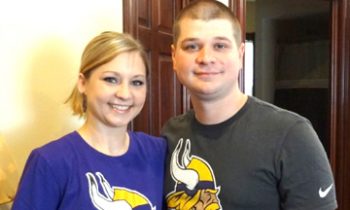 Breathe in, breathe out. A simple body function taken for granted daily by millions of people. But for some, that seemingly simple routine is not quite so simple. A person with cystic fibrosis does not have the ability to breathe so automatically. One out of every 3,000 newborns will be diagnosed with the genetic disorder, which mainly affects the lungs of the patient.

Brittany Olson is one of those who have been diagnosed with CF, and has been living with it for her entire life. Brittany has had numerous lung infections over her 26 years, which have led to decreased lung function and permanent damage.

She is now on continuous oxygen, and has 16% lung function. Doctors have decided that she should undergo a double lung transplant, and plans are being made for that. She will be traveling to Duke University, in North Carolina for the transplant.

“I think me living my life, doing the things I want to do when I can breathe, are honoring them,” Brittany said of the donor whose lungs she will eventually receive. “To think that I could run with the my dogs, or go out in the woods to hunt, or work in the career I want to work in, that would be great!” And there are many more things Brittany would be able to do following the double lung transplant, not the least of which is to breathe easily.

With a positive attitude and a smile on her face, she is preparing for the transplant. Friends are joining together to host a benefit in her honor, and funds raised will be used for transplant related expenses. A pulled pork feed and raffle fundraiser will be held on Friday, October 28. The event will be held at the Elks Club in Worthington, beginning at 5:00 p.m.

A resident of Worthington, Brittany is the wife of Josh Olson, formerly of Heron Lake (the son of Marlys Olson and Dave Olson). Her parents are Ty and Pam Westendorf of Worthington.

“I live with it every day,” Brittany said of CF. She explained that the genetic disease mainly affects the lungs, but also affects the pancreas. “Because of the effects on the pancreas, I’ve ended up with diabetes,” she added. Daily medications, some taken intravenously every eight hours, are normal for Brittany who has always known her lungs would reach the point where a transplant is needed. “There is always a decrease in lung function, and the next option is that I need a transplant, to save my life, and to be able to breathe again,” she added.

She underwent some tests at Duke University several years ago, and it was determined that it was too early for her to attempt a transplant.

With already lowered lung function, recovering from a cold is much more difficult for a person with CF.  “In April, I got a cold and ended up in the hospital,” Brittany explained. In August, she traveled to North Carolina for a five day evaluation at Duke University. She was referred to Duke, as it is one of only two places in the US that would offer the transplant for her. The evaluation is completed, and fundraising has begun to help aid in the transplant.

In order to receive the transplant, Brittany will have to relocate to North Carolina, and undergo a pulmonary rehabilitation program for five days each week for four to five weeks. “This will help to strengthen my body,” Brittany said. “The healthier I am before the transplant, the smoother the recovery and the better the outcome.”

She’s already doing some therapy here, at Prairie Rehab in Worthington, as well as working out. Keeping active and moving help to keep her lungs working, and Brittany has been doing that as much as possible. The therapy she will undergo at Duke is more rigorous. “Your body needs to be healthy, despite the unhealthiness of the lungs,” she added.

It is expected that following the pulmonary rehab therapy, Brittany would be put on the list for receiving transplant lungs. On average, Duke has one of the shortest wait times for listed patients. Her hopes are that she will not have to wait long either. Following the transplant, she will have to take anti-rejection and immuno-suppressants for the remainder of her life.

A $50,000 goal has been set for fundraising, which is expected to cover all expenses related the transplant that insurance will not cover. The funds will help in relocating, as well as having a caregiver present during her entire time in North Carolina. The full recovery could take anywhere from three to twelve months.

JBS has donated the pork for the pulled pork feed fundraiser on October 28. A raffle style auction will be held, in which people may buy tickets, and place them in the box of each desired item. The winning ticket will be drawn at the end of the night, but the winner will not have to be present to claim their prize.

To help raise funds for the lung transplant, Brittany has qualified to use the COTA website, the Children’s Organ Transplant Association. “It’s meant for those 21 and under, or those with CF,” Brittany said. The website, http://cotaforteambrittanyo.com can be accessed to follow Brittany’s transplant journey and also links to the online donation page. In addition, there will be decals for sale and eventually t-shirts which will all include the hashtag, #BrittanyStrong.